For a while, at least, I’ve set aside the Powerbook during the day, and am exclusively a Windows guy while at work. Mostly it’s not bad; the annoyances that have always been a part of Windows are only slightly worsened by the past year’s association with OS X (and I’ve continued to use Windows a lot during that time, anyway). But there’s one thing I’m having a very hard time living without: iChat.

It’s amazing how subtle user interface design is, and how important it is. When I first saw iChat, the only thing that was noticeably different about it was the little speech bubbles, and I saw them as useless eye candy. I was sure the first thing I would do when I got iChat would be to turn them off. And it was the first thing I did—but I almost immediately turned them on again. The bubbles, with their different colors and different alignment (your own icon is on the right, the other person’s on the left) makes it much easier to distinguish different parts of the conversation.

Now that I’m using AIM again, I’m noticing all kinds of things that (like a comfy Eames chair) you don’t appreciate until they’re gone:

Those are mostly in order of priority. If anyone knows of a Windows-based AIM-compatible chat program that supports most of these features, especially the ones near the top of the list, please let me know.

I know a lot of people who’ve been waiting eagerly (and not altogether patiently) for Apple to finally update the 15-inch Powerbook. Mike Clark wrote his own switch commercial to advertise his impatience.

Now they’ve finally made the announcement, just as you might expect, Mike and others like him are making their moves: 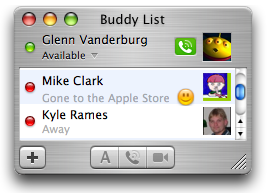 This weekend I debuted two new talks at the Great Lakes Software Symposium: “Tag-Oriented JSP Design” and “Software Development Heresies.” They were both well received, and at the same time I got some good feedback that will improve both talks for next time. That’s the ideal situation.

It was a funny process, though. When I proposed those two talks, I was very excited about Heresies and thought that Tags would be “just another tech talk”—good, but nothing particularly special. Then as I was preparing the talks, my opinion reversed: Tags looked like a great talk that people would be really pleased with, and Heresies looked hazardous: if the audience didn’t want to join the discussion, it would potentially be 90 minutes of Glenn Vanderburg mini-rants, and even I think that gets old pretty quickly.

The actual outcome, however, was yet another reversal. As I said, they were both well received, but Heresies was the one that really rocked. Everyone was interested, there was a lot of energy in the room, and a lot of interaction. Two comments from evaluations have me walking on air: “Nice job of turning my world upside down” and “… you were by far and away my favorite speaker with the ‘Software Development Heresies’ talk.”

The smart thing to do with speaker evaluations is to treat them like figure skating scores, throwing out the lowest and the highest. So that last one gets thrown out of the official tally, sadly … but I can still bask in it for a little while. :-)

And maybe I’ll trust my instincts a little more about what makes a good talk.

Yesterday was our wedding anniversary, and one of the gifts Deborah got for me was Little Worlds, the Flecktones album I blogged about last week (even though I forgot to publish until today).

It takes a while to assimilate three discs of new material, but so far it’s excellent. I’m particularly fascinated, though, by the introduction. Pop disc one in the player and it starts straight in with music. But then hit the reverse-scan button and keep going past (that is, prior to) the beginning of track one. Keep going until you’ve rewound to the -2:40 point and let go. There’s a humorous introduction featuring David St. Hubins and Harry Shearer of Spinal Tap.

The booklet inside the CD case explains that not all CD players support that “feature”. Ours at home does, but (as you might expect) the one in my laptop doesn’t.

I don’t know much about the CD format specs, but I’ll give them the benefit of the doubt and assume that such things are documented features of the way the CD format is supposed to work, and not just bugs found in many CD players. Still, though, it feels like exploiting a bug—or at least a quirk—in a particular medium for art’s sake. (Or maybe it’s just entertainment.)

It’s cool, and funny, but it leaves me with a very strange feeling. I’m old enough to remember vinyl LPs all too well. From the very beginning, CDs were appreciated for their physical durability, and also because the digital recording didn’t degrade. It’s nice to know that those CDs will still sound pristine after quite a few years, and it’s also nice to know that (copy protection measures aside, which is a different debate) I can convert the music and it will continue to be viable after media has changed and CDs have become obsolete.

Except, it seems, for the intro to Little Worlds. I’ve ripped the CDs into iTunes (and thence to my iPod) but the intro is missing. Even if that feature really is a documented part of the CD-audio spec, it’s a quirk that’s not likely to be duplicated by future media formats. I rarely play physical CDs anymore, but if I want to hear that intro again, apparently that’s how I’ll have to do it.

But anyway, like I said: it’s cool, and funny, and leaves me with a very strange feeling. I have a sneaking suspicion that Béla and the band would love that reaction.

I enjoy the music of Béla Fleck and the Flecktones. This past weekend, Greg Vaughn mentioned Fleck to me in passing (he was listening to some old tunes by New Grass Revival, Fleck’s older band). Today I remembered that and realized that it has been about three years since the last Flecktones album I knew about, Outbound. “I wonder if they’ve released anything new since then?”