I absolutely love your open  letters  to  programs. Today I showed a couple of them to Mike Clark during a panel discussion, and he had a hard time maintaining his composure, he was laughing so hard.

I wish I’d thought of that. Keep it up!

You’ve probably noticed that I like iChat. One of my favorite things about it is that it displays any non-default status message right in the buddy list, and many people use those messages to indicate their current whereabouts, etc.

James uses them for self-expression. 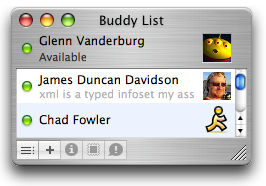 JavaOne is still going on for a few more hours, so a show wrap-up may be premature. But I have to leave early, so it’s time to summarize my experience, at least.

This was my sixth JavaOne. I wasn’t quite sure what to expect this year; I was afraid the conference would be a lot smaller, and that the energy might be low. I’m glad to say it was great. I heard from two sources that the conference was slightly larger than last year, at just over 15,000 attendees.

There’s a mix of good and bad there, but I’ve had a great time. Now I have to go hop on my flight to Milwaukee to speak at the Milwaukee Java Software Symposium!

The first conference I attended after getting my TiBook last year was O’Reilly’s Open Source Convention, and I was amazed to see more Macs than any other kind of laptop there. JavaOne is a slightly different group of folks, of course, and I don’t think Macs dominate here. But they’re in the running. You see them everywhere you look, being used by attendees and presenters. James Gosling is just one example.

How times have changed. Tim O’Reilly is right that the Mac is now the alpha geek’s machine, and with this kind of developer adoption, the great apps for OS X are going to flow ever faster. Part of the reason for Mac uptake among developers is OS X’s BSD underpinnings, and part is just the stability and great networking support. But another important factor is Apple’s commitment to the Java platform. Right here, a couple of years ago, Steve Jobs committed to making OS X the best Java development platform on the planet. Apple is well on the way to fulfilling that commitment.

Why, then, when Jonathan Schwartz emphasized Sun’s commitment to Java on the desktop in Tuesday’s opening keynote, did he mention Linux … but not the Mac?

I’ve been anticipating this reaction. It was inevitable. But we’re not blogging JavaOne because we’re being told to. I, at least, am doing so because I’m here, it’s fun, and—most importantly—I think java.net is important, and I’d like to help it get off to a good start.

Communities are built by the inhabitants. You can’t just decide to go build a thriving, vital community. But that doesn’t mean you can’t seed one, and cultivate it. To do that, you persuade people to move in, provide basic services, and let them build their own community.

It might be useful to remember Levittown, the first planned suburban housing development. It was sterile and artificial, and there was a lot to criticize about it. But it met a need, and families flocked to it. And they didn’t leave things the way they found them. They took ownership and built a unique community with character and life.

Sun, with the help of some partners, has built the streets and the infrastructure, put up some houses, and persuaded a few of us to move in. There are more houses open. It may feel a little sterile at first, until we can move some walls, slap up some chartreuse paint, and put the flamingos in the lawns. But people are already starting to do that. It’ll be fun to see what java.net feels like by this time next year.