One of the earliest challenges we faced in building our team at LivingSocial was eliminating “us and them” attitudes between the “locals” and the “remotes”. That sentence should give you a clue about the problem: the words we use are important, and they affect the way we see other people and ourselves. Therefore, one of the ways we solved the problem was to rethink our choice of words. 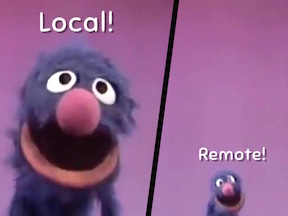 The opposite of “remote” is “local.” At least in terms of associations and connotations, those words carry value judgments. Used literally, “remote” describes places, and means that the places are challenging and time-consuming to reach. But we also use “remote” in reference to people: those who are withdrawn, cold, or hard to communicate with. Calling the on-site developers “local” and others “remote” helped to reinforce a class distinction, where everyone perceived the remote developers—at least a little bit—as second-class citizens. That affected how the “local” developers worked with the remote folks; perhaps worse, it also affected how remote developers saw themselves, causing low morale and a sense of isolation. The result was reduced productivity and retention.

Additionally, apart from the cultural issues, those terms encouraged two different sets of communication and coordination patterns. Teams comprised mostly of “local,” on-site employees would naturally adopt a culture and communication style appropriate to a colocated team (impromptu conversations, mostly voice communication). Teams of “remote” developers would depend much more on email and chat. This meant that we effectively had two teams: the developers who worked at headquarters, and those who worked remotely. That wasn’t what we were aiming for.

We chose to start emphasizing the term “distributed.” Rather than a team with some local and some remote developers, we were all on a distributed team. The words “remote” and “local” aren’t forbidden, and in some contexts they’re still the right words for a legitimate distinction. But the emphasis—especially when speaking about the whole team or our work style, collaboration techniques, and communication patterns—is on the word “distributed”.

It took a while to change the vocabulary throughout the organization. But after that, it didn’t take too long before we started seeing the positive effects. In this series we will talk about several specific ways that on-site and remote employees can choose to work in the same way, easing communication and collaboration across the organization. For now, it’s sufficient to say that adopting this vocabulary was a big morale boost for the remote employees, and helped to build a more unified team.

There are other terms that some people use, and that we considered. You might call a team that emphasizes satellite offices rather than working from home a “multi-site” team, and many teams that engage in offshoring fit that model. Multi-site teams have some of the same challenges, plus some additional problems; in our opinion, choosing a multi-site strategy sacrifices many of the benefits of a fully distributed team.

Two other terms are found in the titles of the Wikipedia pages that address the issues we’re discussing: Virtual team and Telecommuting. While there’s nothing necessarily bad about those terms, they didn’t resonate as well with us. I doubt that anyone on the team at LivingSocial would say there’s anything “virtual” about it: it’s very real, with a vibrant, dynamic culture. To say that a team like ours is “virtual” implies that the most important thing about “real” teams is that they sit together, and that’s silly. And “telecommuting” seems to describe tools and techniques rather than the team itself; at best, just like “local” and “remote,” it refers to individuals on the team rather than saying anything about the team as a whole.

Words can divide and belittle, or they can build up and unify. And even neutral or positive words, chosen poorly, can distract us from what’s important. The right words can make a huge difference. We saw things start to change for the better at LivingSocial when we focused on the term “distributed” as a word that included all of us. That’s why we’ve titled this series “Managing Distributed Teams”.